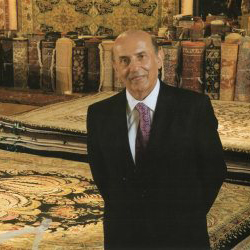 Mr. Nasseri encourages clients to plan and decorate each area of their house with elegance and personal style, covering all the essential elements of design—including the emotional ones. The result should be a house that welcomes family and friends, one that enhances our quality of life.

Fred Nasseri was born in Esfahan, Iran. Nasseri’s father was a prominent attorney and collector of fine rugs. Mr. Nasseri’s fathers’ knowledge and love of Fine Art has been passed down to Fred. Fred graduated from the University of Toulouse in France with a Doctorate at Law and PhD. in Economics from Tehran University. He has worked as a Professor, Attorney and Diplomat serving as the Chief of the Central Budget Bureau during the Shah’s regime. He represented Iran in the International Labor Organization in Geneva. Child labor in the rug weaving industry was one of the main areas of concern in the early 1970’s. That exposure, coupled with growing up in Esfahan, a major center for rug weaving, and living with his fathers’ wonderful collection of Persian rugs, helped Nasseri find his focus when he arrived in the U.S. in the early 1980’s.

After the fall of the Shah, Fred and his family moved to the United States. During their first several years in the United States Fred spent much of his time in France as an international oil consultant. In 1986 Fred entered the Oriental rug business. He traveled to New York and discussed his intention with Mr. Kazemi, who was a prominent rug dealer in Garden City, Long Island. Mr. Kazemi suggested Fred work with him to learn the fundamentals of the business before opening his own business. Fred and his wife Pat accepted Kazemi’s offer. Fred managed Kazemi Oriental Rugs and Pat worked in the restoration department. In 1989 Fred and Pat left New York and opened the Gallery of Oriental Rugs in Wilmington North Carolina. Fred Nasseri is an Oriental Rug Retailers of Amercia (ORRA) Certified Appraiser. He is an active member in the Wilmington community.